Researchers from the GEoREST project have participated in an interdisciplinary study that proposes the causes of the Castor earthquakes. The details of the study can be found in this 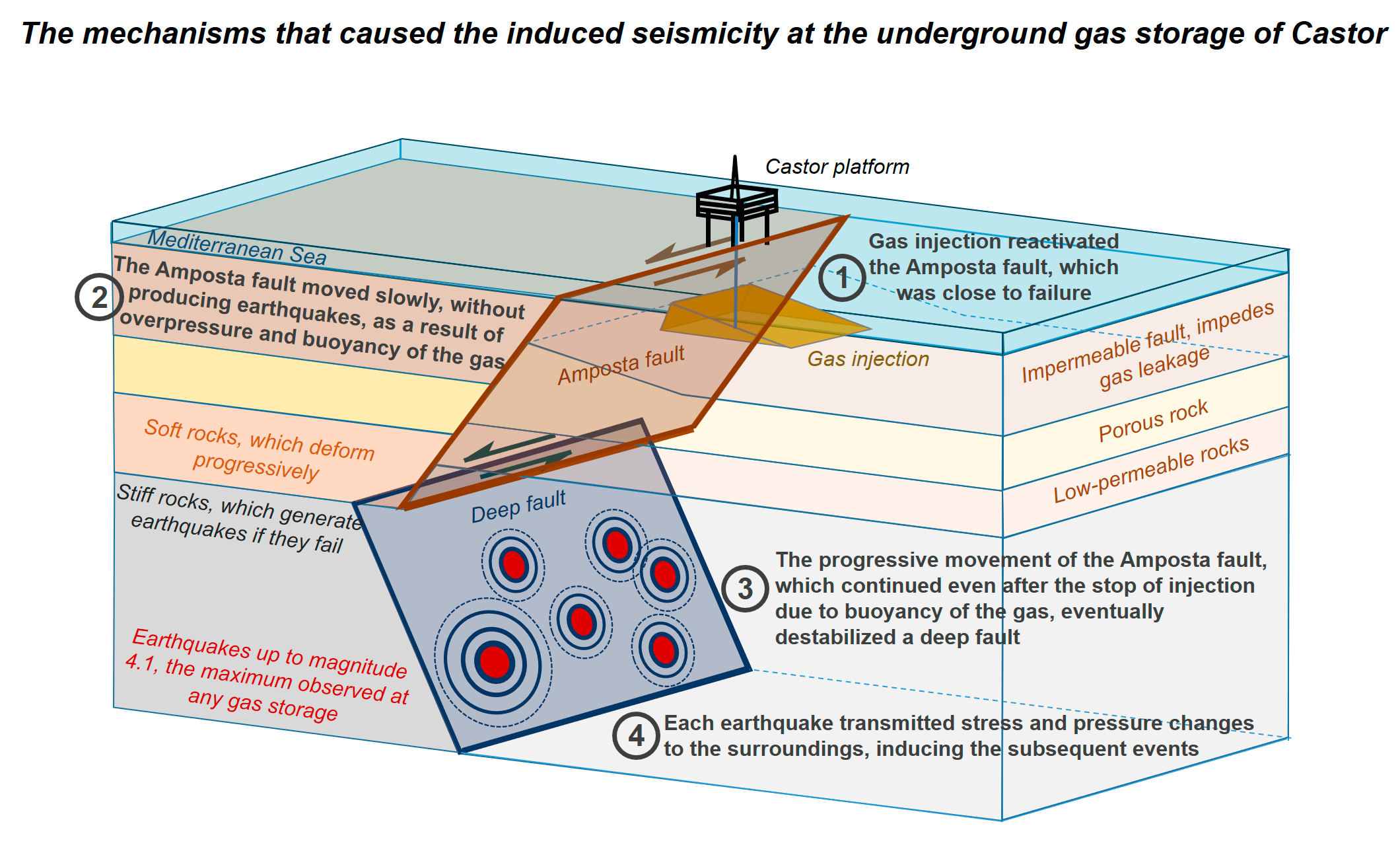 Diagram of the mechanisms that caused the induced seismicity at the underground gas storage of Castor | Source: Victor Vilarrasa

A study led by the Institute of Environmental Assessment and Water Research (IDAEA) and the Institut de Ciències del Mar (ICM), both belonging to the National Research Council (CSIC), has revealed the underlying causal mechanisms of the earthquakes that took place after the gas injection in the Castor gas storage project in Castellón in 2013, which led to its closure four years later.

The decision to abandon this project forced the Spanish government to assume the construction costs. This decision was based on the conclusions of a report commissioned by the Spanish government from the Massachusetts Institute of Technology (MIT). The MIT report attributed the sequence of earthquakes to the initial gas injection, which was carried out to allow the start-up of this depleted oil field as a gas storage reservoir, but did not clarify the causes of the larger earthquakes.

CSIC’s study, published in the journal Geophysical Research Letters, locates these earthquakes between 4- and 10-kilometres depth, below the gas injection point (at 1.7-kilometres depth), which is consistent with the observed magnitudes.

According to IDAEA researcher and author of the study Víctor Vilarrasa, “at the depth of the gas storage reservoir, one would expect low-magnitude earthquakes because the rocks are relatively soft, so when they break, they break smoothly and deform gradually”. However, the earthquakes in Castor registered high magnitudes and were even perceived by the population. “This is what usually happens when earthquakes strike at greater depths because the rocks are more rigid and release more energy when breaking”.

“The fact that the earthquakes occurred at that depth makes us wonder how they happened. The usual mechanism of increasing pore pressure would not be valid in this case, since the two formations (the gas storage and the deep fault where the earthquakes occurred) are not hydraulically connected. Therefore, the increase in the pressure caused by the gas injection could not reach such depth”, specifies ICM researcher Antonio Villaseñor, who has also participated in the study.

"In addition, we need to take into account that the earthquakes, which exceeded magnitude 4 - greater than any earthquake observed in underground gas storage reservoirs - occurred several days after the injection finished, which makes the interpretation of these earthquakes even more difficult”, points out IDAEA researcher and author of the study, Jesús Carrera.

According to the work, in which Geosciences Rennes (GR) (France) has also participated, the seismic activity detected near the Castor plant in 2013 was due to the fact that the gas injection reactivated the Amposta fault, producing a slip of the fault without producing earthquakes. This caused another fault, deeper and previously unknown, to move, triggering the earthquakes.

“Although the existence of the deep fault was not known, the Amposta fault was well known and, given its characteristics, the possibility of its reactivation could have been foreseen”, explains Silvia De Simone, who works at GR. From De Simone's opinion, "this fact highlights the need to study the areas of interest to carry out deep underground activities in detail before starting any operations."

The authors specify that, during the 15 days of injection, the increased pressure was the main cause of the Amposta fault movement, but once the injection finished, the gas, which is much lighter than water, exerted a vertical force that continued to destabilize the Amposta fault. The continued effect of this gas force over time is what, according to the research team, would explain why the largest earthquakes occurred after the gas injection finished.

During the research process, the authors carried out a seismicity analysis of the Castor gas storage project using a model that considers the geology of the area in order to accurately calculate the location of the earthquakes. This allowed them to identify the deep fault that caused the seismicity. Then, they used calculation software programmes to simulate gas injection and its effects on the Amposta fault, as well as the interactions between earthquakes, with the aim of understanding the mechanisms that caused the seismic sequence.

"This study confirms the need to understand the causes of induced seismicity in order to be able to forecast it and design projects that safely utilize low-carbon underground energy resources", conclude the researchers, who are convinced that the complexity of the Castor case will help to improve the predictive capability of future seismic activity.

A study by CSIC reveals the causes of the induced earthquakes at the Castor underground gas storage. (https://www.youtube.com/watch?v=A6OoEqsQjyk)