We need to reach zero emissions by 2050 in order to meet the Paris Agreement goal of limiting temperature increase below 2.0 °C, but ideally below 1.5 °C. This objective will only be reached if several actions are undertaken simultaneously. Among the necessary actions, the International Energy Agency suggests that the subsurface can contribute between 20 to 30 % of the total CO₂ emissions reduction. This contribution comes mainly from geologic carbon storage, but also from geothermal energy and subsurface energy storage. The latter is particularly important because renewable energies do not always produce energy in the moment that we need it and thus, we need to store energy when there is an excess of production and utilize the stored energy when the demand exceeds the production. Since batteries do not have enough capacity, energy storage in terms of hydrogen, compressed air energy storage (CAES) or aquifer thermal energy storage (ATES), will play a major role to efficiently store energy. 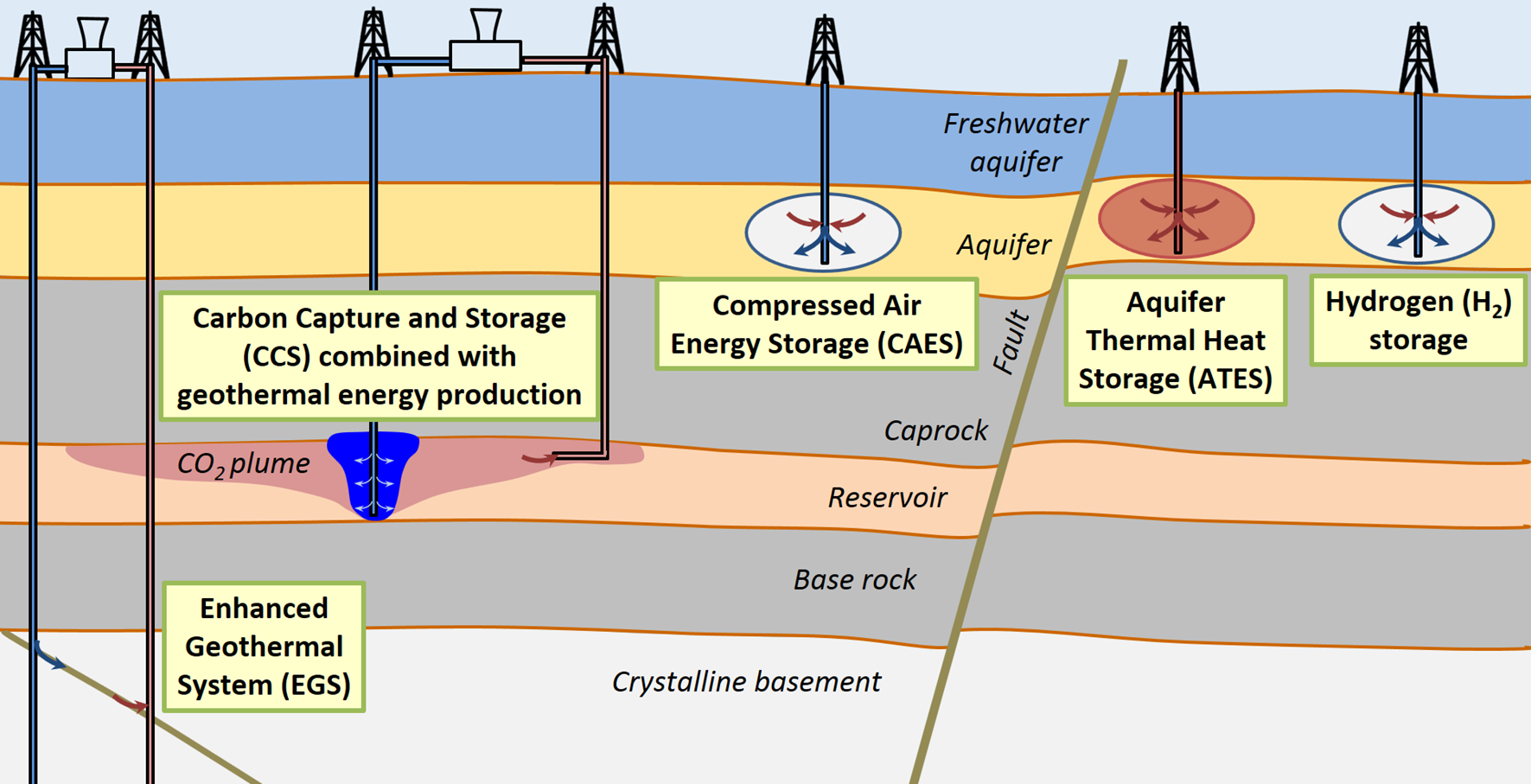 The downside of these geo-energies is that when we inject or extract fluids from the subsurface, we alter the pore pressure, temperature, stress state and geochemical composition of the geological formations, which may induce seismicity if fractures and/or faults are destabilized. The main geo-energy applications that may induce seismicity and thus, may benefit from the breakthroughs of this project are described here, including the potential harm to the environment, animals or plants:

This is a renewable energy source that provides energy without daily and seasonal fluctuations and is available worldwide. Geothermal energy projects usually inject and produce water from the same geological formation, creating a closed loop in which the pumped water is reinjected. Thus, if the system does not leak, there should not be any harm to the environment, animals or plants. The circulating fluid is usually water, but with a high concentration of dissolved ions because the high temperature of the geological formation enhances mineral dissolution. This high concentration of dissolved ions may lead to mineral precipitation when pressure and temperature drop in the pumping wells close to the surface, causing scaling of wells (e.g., Wanner et al., 2017). This problem highlights the importance of the geochemical composition of the circulating water in terms of operation and suggests that it would be advisable to put in place measures that prevent the circulating fluid to reach the environment in case of leakage along the pipes. As an alternative to water, it has been suggested to use carbon dioxide (CO₂) as the working fluid to produce geothermal energy (Brown, 2000; Randolph and Saar, 2011). In that case, the pumped CO₂ is also reinjected into the subsurface, so there are no hazards unless there is leakage. If a CO₂ leakage occurs, there is no affection to the environment because CO₂ is already present in the atmosphere. However, if CO₂ is accumulated in depressions or in the basement of buildings, it could be fatal for humans and animals, because they could die by asphyxia. Thus, CO₂ detectors should be placed in the surface along the pipes to detect any CO₂ leakage and act quickly to stop it.

The aim of this application is to permanently store large amounts of CO₂ in deep geological formations to mitigate climate change. If the storage is successful, CO₂ will permanently remain deep underground. However, there is the risk of leakage of a small portion of the injected CO₂ along wells, faults or across the caprock. CO₂ leakage along wells can be detected by regularly monitoring the CO₂ concentration at the wellhead. Such an event occurred in a well at the In Salah CO₂ storage pilot project, in Algeria, and the leakage was immediately remediated (Ringrose et al., 2009). On the other hand, CO₂ leakage across the caprock or through faults may lead to a diffusive leakage that can be more difficult to detect and remediate. Furthermore, CO₂ does not necessarily need to reach the ground to produce harm to the environment, because if CO₂ reaches freshwater aquifers, it may pollute drinking water resources because of water acidification and heavy metals release (Wang and Jaffe, 2004). CO₂ will not penetrate caprocks because of their high entry pressure. Thus, the likelihood of CO₂ leakage across caprocks, especially if they are thick or in multilayer sedimentary basins, is very low (Birkholzer et al., 2009). A more active debate has taken place about the possibility that induced seismicity may enhance fault permeability, leading to CO₂ leakage (Zoback and Gorelick, 2012a, 2012b, 2015; Juanes et al., 2012; Vilarrasa and Carrera, 2015a, 2015b). Since the crystalline basement is critically stressed, but the sedimentary rocks where CO₂ is planned to be injected are usually not (Vilarrasa and Carrera, 2015), induced earthquakes mostly nucleate in the crystalline basement below the storage formations, so permeability enhancement of faults occurs below and not above the storage formation (Verdon, 2014). Furthermore, faults in sedimentary basins are highly heterogeneous because they cross multiple aquifer-caprock sequences. This heterogeneity hinders upwards CO₂ flow in case of CO₂ reaching a fault (Rinaldi et al., 2014). Yet, monitoring and interpretation of the measured data must be performed for the prompt detection of CO₂ leakage and its remediation (Zeidouni and Pooladi-Darvish, 2012).

This geo-energy application consists in injecting air at high pressure in an aquifer when there is excess of energy production from renewable sources, and pumping and recovering energy when the demand is higher than the production from renewable sources. Since the injected fluid is air, this application poses no hazards to the environment, animals or plants. Nonetheless, the water of the aquifers where air is injected should not have any potential use because the oxygen of the injected air may alter the geochemistry of the aquifer.

Underground Gas Storage (UGS) is routinely performed for strategic reasons to ensure gas supply in periods of high demand. When there is less gas demand, usually in summer, gas is stored and it is recovered when the demand peaks. The risk of inducing seismicity in UGS is low, since except for exceptions (e.g. Castor case), the 640 UGS sites worldwide have not induced felt seismicity. Nonetheless, care should be taken in avoiding any leakage because methane is flammable.

Since induced seismicity is usually associated with hydraulic fracturing, we devote some lines to explain this geo-engineering application:

Hydraulic fracturing consists in injecting a fluid at high pressure to fracture the rock. The fluid is injected at such high pressure that the minimum effective stress equals the tensile strength of the rock, which generates a tensile fracture perpendicular to the direction of the minimum effective stress. Thus, hydraulic fracturing is performed to enhance the permeability of low-permeable rock. It can be used for well stimulation in geothermal energy, but its most widely known application is shale gas exploitation. The injected fluid is usually water, but it has also been proposed to use CO₂ (Middleton et al., 2015). The shale gas industry usually adds additives, which may be hazardous for the environment, to water in order to improve the performance of the fracturing operations. In addition to these additives, the backflow that occurs after hydraulic fracture operations becomes radioactive after being in contact with the radionuclides present in the shale that is being hydraulically fractured. Thus, the backflow of hydraulic fracturing operations must be managed with extreme care. Regarding induced seismicity, hydraulic fracturing generates microseismic events of such low magnitude that they cannot be felt on the ground surface. In rare cases, a generated hydraulic fracture has intersected a fault, pressurizing it, which has led to its reactivation and the occurrence of a felt earthquake on surface. But the felt seismicity is not directly induced by hydraulic fracturing. Nonetheless, it should be highlighted that the environmental risks related to the chemical composition of the backwater and the risk of induced seismicity are completely different. Indeed, even though the risks associated with induced seismicity are low in hydraulic fracturing, the environmental risks related to such operations should be assessed site specifically to decide on the feasibility of such projects.

Vilarrasa, V., & Carrera, J. (2015a). Geologic carbon storage is unlikely to trigger large earthquakes and reactivate faults through which CO₂ could leak. Proceedings of the National Academy of Sciences, 201413284.